Should My Dog Eat Grain-Free Dog Food, Or Is It Unhealthy?

Grain-free dog food, despite a higher price point, quickly took off. Instead of carbs like wheat, barley, corn, rice, buckwheat or oats — staple ingredients of commercial dog food for years — grain-free boasted ingredients like sweet potato, potato, legume, legume seeds, lentils and peas. Dogs ate it up at the behest of their humans.

In 2018, the New York Times reported that by 2017, grain-free pet food dominated nearly 44 per cent of the market and did around $2.8 billion in sales. The Times also reported that grain-free diets grew in popularity beginning in 2007, after pet food containing wheat gluten imported from China was found to be contaminated with melamine and 14,000 dogs got sick.

The reason for grain-free’s popularity may also have a very human rationale — gluten free (gluten is a general term for proteins found in wheat), low carb human diets also dominated headlines and eating habits. In 2012, around 30 percent of American adults claimed to be cutting down or avoiding gluten. In 2017, Forbes reported that 3.1 million people follow a gluten free diet.

If we’re not eating gluten (and therefore wheat), the thinking goes, why should our dogs? We love them and they rely on us to give them nutritious, healthy food.

Then, in mid 2018, the U.S. Food & Drug Administration announced it was investigating canine dilated cardiomyopathy (DCM) occurring in dogs that had been eating specific pet foods, in particular ones labelled and sold as grain-free.

DCM is a serious and potentially lethal heart condition. It causes the heart to be unable to pump blood through a dog’s vascular system and can also cause blood to congest a dog’s lungs. Visible symptoms of DCM include lethargy, weakness, weight loss, collapse, coughing, panting and a swollen abdomen, which are symptoms of various illnesses in dogs.

The FDA investigation studied the diets of dogs reporting DCM. “Product labels were examined to determine whether the product was grain-free … and whether products contained peas, other lentils including chickpeas and beans, or potatoes (including sweet potatoes), the FDA’s report, FDA Investigation into Potential Link between Certain Diets and Canine Dilated Cardiomyopathy notes. The FDA found that 90 per cent of the foods the dogs were eating were considered grain-free. This put a damper on the popularity of grain-free dog food.

Media, from publications like the Atlantic to public radio like the Canadian Broadcasting Corporation, covered the FDA story with headlines like “Grain-free dog food may be linked to deadly heart disease.”

Controversy still swirls and grain-free products remain on the market, even while sales drop and marketers have started promoting “legume free” products.

Advocates of more typical grains like wheat suggest dogs can eat it safely unless they have a proven gluten allergy, which is rare in dogs. Food allergies for dogs are more frequently protein related.

Since July 2018, the FDA has released three public reports on the status of their investigation about grain-free pet food.

“The definitive cause of canine DCM is the subject of debate, although a number of factors including nutritional, infections, and genetic predisposition have been implicated,” according to the Cornell University College of Veterinary Medicine.

Most Dogs that Eat Grain-Free Diets get DCM

The American Veterinary Medical Association estimates there are about 77 million pet dogs in the United States and that nearly 40 per cent of households have a dog.

“Between January 1, 2014 and April 30, 2019, the FDA received 524 reports of DCM,” the FDA notes in an article on its website. “Most dogs in the U.S. have been eating pet food without apparently developing DCM.” 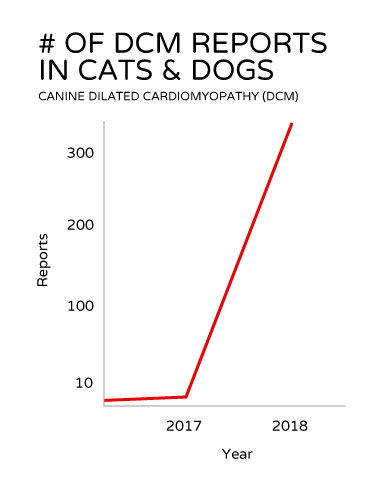 Heart disease is a serious health risk for dogs overall: about 10 per cent of dogs in the US get heart disease.

The FDA is limited in the amount of statistical data it can collect.

“Because the occurence of different diseases in dogs and cats is not routinely tracked and there is no widespread surveillance system … we do not have a measure of the typical rate of occurrence of disease apart from what is reported to the FDA,” the investigation report states.

Grain-Free Food is the Only Cause of DCM

Dilated cardiomyopathy is also a genetic condition that impacts large or giant breeds like Irish Wolfhounds and Great Danes.

“It is believed to be less common in small and medium breed dogs,” the FDA notes.

The FDA has also received multiple reports of DCM in Golden Retrievers, partially because there appears to be a reporting bias among Golden Retriever owners. But even small dogs like Pugs and Yorkshire Terriers have had DCM.

Diet, age and physiology may also play a role in DCM.

“Genetic forms of DCM tend to affect male large and giant breed dogs beginning in middle to older age,” the FDA says. “There have been a greater proportion of males than females, consistent with what is seen in genetic forms.”

Grain-free foods aren’t carb free. The replacement ingredients in commercial pet food are also sources of carbohydrates. So if you’re using grain-free products to reduce your dog’s carb consumption, or for weight loss, it might not work.

Dogs do require carbohydrates for energy, but it is important their food intake be balanced and contain the right mix of fat and protein.

Grain-Free Diets are a Waste of Money

Dogs with gluten allergies would disagree!

To determine if your dog has a gluten allergy, you’ll need to work with your vet. Symptoms of gluten or specific grain allergies include dull coats, frequent diarrhea, weight loss, chronic ear infections, red/itchy paws and constant paw chewing or licking. Of course, these symptoms may indicate another food sensitivity or allergy, so you may have to go through an elimination diet to determine the cause of the symptoms. 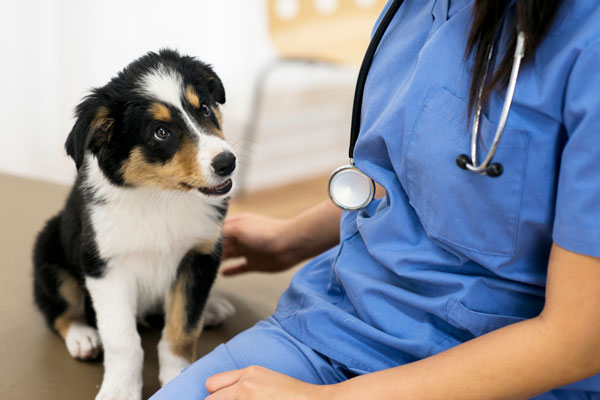 Allergy tests for dogs can be expensive. Talk to your vet about the best approach to help determine what’s causing issues for your dog.

Dogs Can’t Digest Grains, Which is Why They Shouldn’t Eat Them

“…to date, 10 key genes have been identified that demonstrate our domesticated dogs’ increased ability to digest starch and fat relative to his ancient predecessor, the world,” writes vet Donna Solomon in the HuffPost.

The processing commercial dog food undergoes before it ends up in your dog’s bowl also helps it be digestible.

“Most dry kibble processing starts with a grinding phase for product uniformity, followed by a cooking phase that gelatinized or cooks the starch for greater digestion and bioavailability,” writes Ryan Yamka for PetfoodIndustry.com.

… for most dogs, grain is fine, and usually contains more nutrients than replacement ingredients used in grain-free diets

It’s important to note that the FDA didn’t study the health impacts of common grains — it studied the impact of the replacement ingredients — ingredients like sweet potato, lentils, peas, legumes, legume seeds and regular potatoes.

Dogs need fibre, and carbohydrates for energy. Both those things are readily available through traditional grains. Some grains are higher in fiber, and others are higher in protein.

While dogs are primarily meat eaters (and high quality pet foods generally list a protein as the first ingredient), dogs are able to eat and digest a range of other foods, including fruits and vegetables and yes, grains. And occasionally, the slice of pizza they steal off your plate when you’re not looking.