The History of Dry Dog Food

The History of Dry Dog Food

The History of Commercial Dog Food in America

Dogs and humans have been living side by side for centuries. In modern life, they’re part of our families — loved and necessary companions. As our relationships with our dogs has changed, what we feed our dogs has too. From foraged food to kibble, what humans put in the doggie bowl has evolved.

“At the end of the 14th century Gaston III, Comte de Foix … wrote a book about hunting called Livre de Chasse, which included a section on how he took care of the greyhounds he used in the hunt,” notes an article titled Medieval Advice on How to Take Care of Your Pet from Medievalists.net. “Besides being fed bran bread, the dogs would also get some of the meat from the hunt. If a dog was sick, he would get better food, such as goat’s milk, bean broth, chopped meat, or buttered eggs.”

Dog food has commercialized since the 14th century. One of the most widespread innovations to how we feed our pets was the creation of dry kibble, which is now widely available comes in a wide variety of sizes — need a 30 pound bag of kibble anyone?

Until the 1900s, dogs had to make do with what they could find for themselves, or with raw meat and table scraps from their owners.

The beginnings of the processed, commercial dog food industry are somewhat murky, but relatively modern.

“Between 1890 and 1945, the manufacture and sale of pet foods continued to increase despite such criticisms, as consumers became more possessive of their leisure time, opting to spend it on anything but “slaving over a hot stove” for their dogs,” writes Mary Elizabeth Thurston in her book Lost History of the Canine Race. “Seen by many as an ideal entrepreneurial business opportunity — utilizing raw materials nobody else wanted (mostly inedible meats and grains) to produce a product eagerly sought by a growing population of dog owners with increasing disposable incomes — several new dog food companies were founded, many of them still in existence today.” 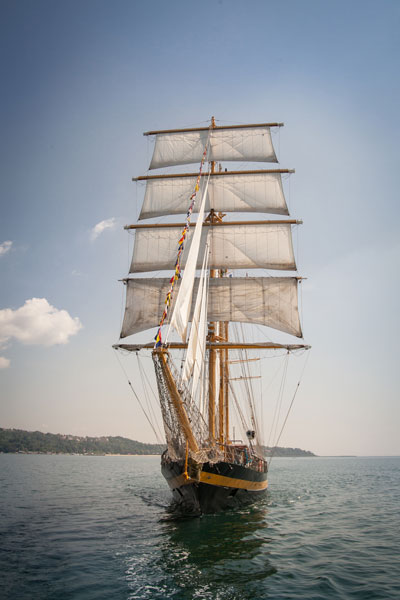 An often repeated tale involves a young man from Cincinnati named James Spratt, who in 1860 sailed to England hocking lighting rods, of all things. Once docked, he noticed that the ship’s crew threw the leftover biscuits (hardtack) on the dock, where dogs scarfed them down. Hardtack, made of flour, water and salt and baked until hard and dry, was shelf stable for long ocean voyages.

Spratt decided to make cheap biscuits and sell them to urban dog owners. His creation was made from wheat, beetroot and veggies bound with beef blood. Some sources suggest instead of beef blood, the last ingredient was unsalted gelatinous parts of Prairie Beef. Delicious. For dogs at least.

“The biscuits were expensive — a 50-pound bag cost the equivalent of a day’s wages for a skilled craftsman — but Spratt’s target market was England’s country gentlemen,” according to the New York Times article titled Who Made That Dog Biscuit? Other tidbits from the article note that:

“It wasn’t until 1907 that the American inventor Carelton Ellis came up with the idea of making dog biscuits into the now-iconic shape of a bone.”

It wasn’t until the 1920s that other commercial dog food found a foothold.

In the early 1900s, the expansion of automobile and tractor use meant horses weren’t as necessary for travel or labour. In 1922, Ken-L Ration became the first canned dog food available in the United States. It was made from horse meat, which was accessible and cheap. The product was created by the Chappel brothers, from Rockford, Illinois.

“Ken-L Ration became such a success that by the mid-1930s, the Chappels were breeding horses just for dog food,” writes Tim Phillips in Learn from the Past on petfoodindustry.com. “By 1941 canned dog food had a 90% share of the market.”

But then the United States entered the Second World War. Tin and meat was government rationed and canned pet food wasn’t considered essential. Food producers had to find another way to get dog food to consumers.

The Second World War pushed innovations in weaponry, manufacturing, medicine and tele-communications — and in the dog food industry. Food companies strove to create shelf stable food via by-products from cereal manufacturers. Dry food could be sold in bags or cardboard boxes, instead of tin cans.

“After World War II, the burgeoning success of commercial dog food was part of a sweeping societal trend toward modern conveniences that would improve the overall standard of living and maximize the consumer’s leisure time,” Thurson writes. “Women embraced anything that would free them from the kitchen or ease their household chores. Like drive-through restaurants and frozen entrees, prepackaged dog food was just one more culinary advantage.”

An ethical shift in America also drove mass consumer distaste for horse meat in dog food.  Horses were no longer considered only labourers or a means of transportation — they were companions and show animals.

The Rise of Dry Dog Food (Also Known as Kibble)

In 1894, a company called Robinson-Danforth was founded. It was focused on feeding farm animals. In 1902 the name was changed to Ralston Purina. Ralston Purina “began as an alliance between Purina and the nutrition specialist, Dr. Ralston, to produce whole grain cereal” — for people, not pets.

But it wasn’t until 1956 that Ralston Purina launched the first pressure cooked dry food, or kibble as it’s commonly known, for mass consumers. Dry kibble was created via extrusion, which is a process used for producing other shelf stable foods. This type of manufacturing process is still used today by commercial dog food producers.

Dry food is an essentially modern innovation. Kibble is the most popular dog food format on the market, although there are more brands and types of commercial food than at any point in history. Raw dog food, low temperature dehydrated food, freeze dried, and baked dog food provide new choices on top of kibble and canned.

“U.S. pets consume over 9.8 million tons of pet food annually, valued at $30.3 billion,” the Pet Food Institute (PFI) notes on its website. The PFI says that nearly every American state manufactures pet food. The PFI’s members make up “98% of all U.S. pet food and treat products,” according to its website.

In 2019, nearly $100 billion was spent on pet products and services in America. Pet food and treats made up the largest category.