What Ingredients Shouldn’t be in Dog Food?

What Ingredients Shouldn’t be in Dog Food?

Pet owners enjoy a wide range of product choices when it comes to dog food. Raw, dehydrated, air-dried, freeze-dried, kibble, canned — there’s something for everyone, and for every budget. Pet owners can go organic, or natural, or all meat, or grain-free, or with grain. It’s just a matter of finding the right food for your dog and your lifestyle. Most pet owners want the best product they can find that also fits their budget. Even so, there are some ingredients that are best to avoid as often as possible.

Avoiding products that contain ‘meat’ or ‘meat meal’ is a good idea if your dog has any protein allergies. Unnamed proteins simply labeled as ‘meat’  means they are allowed to contain cattle, pigs, sheep, or goats, according to the Association of American Feed Control Officials (AAFCO), which provides guidelines for pet food.

But as a pet owner, you won’t know for sure which ingredients are in the product, or in what percentages they appear. This means if you’re trying to avoid a specific protein, you may be unsuccessful. If your dog develops a food allergy later, you’ll need to work harder at an elimination diet because you won’t know what protein is setting your dog off. It’s better to find a product that clearly states which protein is in it (like beef).

Meat meal is also a good one to avoid due to its vagueness.

“Meat Meal is the rendered product from mammal tissues, exclusive of any added blood, hair, hoof, horn, hide trimmings, manure, stomach and rumen contents except in such amounts as may occur avoiding in good processing practices,” the AAFCO states on its website.

Your dog doesn’t need its food to come in unnatural reds, oranges, or greens. It really won’t hesitate at lunchtime even if the food is a dull brown or natural color. There’s no nutritional value in artificial colors. Some consumers worry that pet food dyes cause allergic reactions or upset stomachs — or worse — in pets.

Pet food manufacturers aren’t necessarily shy about why there is added color in their food.

“We use both nature-identical and artificial colors in very small amounts in some of our products,” the Purina UK website states. “Like in the human food industry, colors are used to give it a more appealing and appetizing appearance.” At the same time, the company committed to removing artificial colors from main food product lines in 2020 and from treat lines by 2023 — at least in the UK.

In the United States, dog owners may need to look specifically at foods labeled organic or natural and read the nutritional statements and ingredients to be sure.

Clearly, consumer demands are driving changes in the pet food industry, at least for some companies. There are natural dyes on the market, beet powder, and turmeric in particular.

Food dyes are complicated and controversial — the FDA writes extensively on the history and approval of food dyes.

Don’t be fooled by pretty shapes either: your dog doesn’t need its food to come shaped like a mini bone or cute squiggle — this is more to drive human purchasing habits than it is to convince your dog to eat. After all, dogs, on occasion, happily eat their blob-shaped vomit with no problem!

The United States Food and Drug Administration considers it generally safe but there are limitations about how much BHA and BHT is really safe for consumption. Dehydrated potato shreds, for example, are allowed to contain 50 BHA parts per million. Same for breakfast cereal.

Because it is present in many products, “recent estimates of BHA and BHT daily intakes showed that ingestion of these compounds through an average diet can get close to their acceptable daily intake,” write the authors of a report titled Endocrine disruption effects of butylated hydroxyanisole, which appears on the US National Library of Medicine National Institutes of Health website.

Dogs could consume more than a safe amount if they regularly eat products containing BHA.

The National Institutes of Health report that BHA is likely to be a human carcinogen, based on studies done on animals — but some animals were fine. The state of California lists BHA as a carcinogen.

BHT is not a listed carcinogen and is generally considered safe, but rats fed BHT in one study did develop lung and liver tumors.

Until there is more research, it’s best to avoid these preservatives in dog food, especially since it may be hard to determine how much your dog is getting.

Ethoxyquin is also a preservative. Some major dog food producers have stated it to be a safe ingredient that prevents the degradation of fats and oils in pet food, and suggest that cases that showed its toxicity involved animals eating amounts that are well beyond what is considered safe.

Ethoxyquin isn’t approved by the FDA as an additive in human food (except in powdered paprika and chili to preserve color), although trace amounts are allowable if they occur during manufacturing. Dog food doesn’t get the same restriction in this case and it can be found in canned dog food.

It might be enough for some pet owners to know that Ethoxyquin was created by Monsanto. In 2015, the European Food Safety Authority reported that it couldn’t make a conclusion about the safety of the product as a feed additive because of a lack of data. Seems best to avoid it and all chemical preservatives as often as possible.

Xylitol isn’t good for dogs because it can cause a quick release of insulin and lead to a serious condition called hypoglycemia. The FDA’s Center for Veterinary Medicine has received reports of xylitol poisoning because dogs consumed sugar-free ice cream (containing xylitol) and chewing gum.

Symptoms of a sudden decrease in blood sugar include lethargy, weakness, staggering, bad coordination, and seizures. These serious symptoms may not manifest for 12 to 24 hours after consumption. The FDA suggests taking your dog to the vet right away if it has eaten Xylitol.

Dogs don’t need sugar, although there is nothing wrong with giving them a small piece of fresh or frozen fruit as a treat.

Fruit can be found in a variety of commercial dog foods to boost their nutritional value, but avoid added sugar, and certainly added corn syrup. Corn syrup is sweeter than sugar and you don’t want to give your dog a sweet tooth. 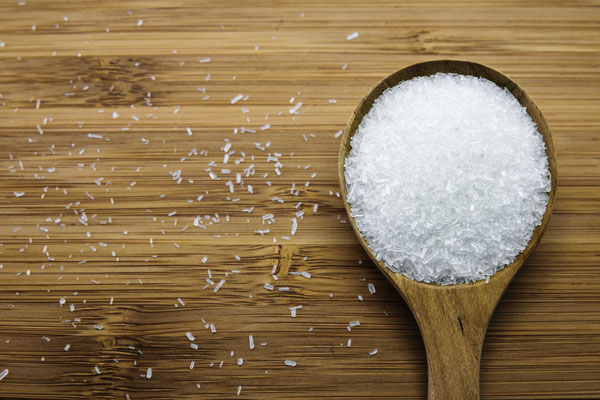 Most humans avoid monosodium glutamate (MSG) when they can. It’s another one of those products that is generally recognized as safe by the FDA, but people still report feeling headachy or nauseated after eating it. Your dog might not be able to communicate that it’s feeling unwell from its dinner unless it vomits.

The National Library of Medicine provides a 2008 study that showed that mice injected with MSG developed inflammation, obesity, and type 2 diabetes. The study’s authors called for MSG to have its safety status reassessed.

If you’re reading your label and don’t see MSG listed, it doesn’t mean you’re in the clear. If MSG is contained in another ingredient, it doesn’t need to be listed in the ingredients specifically. It can appear as ‘natural flavor’ or hydrolyzed protein.

According to Dogs Naturally Magazine, MSG can also hide in the following ingredients:

Nitrites and nitrates (sodium nitrite) are not ideal

These are preservatives typically found in sausages, bacon, ham, hot dogs, and deli meats — all foods that shouldn’t be given to dogs because of their high fat and salt contents anyway. The World Health Organization classified processed meats as a carcinogen for humans.

Sodium nitrite can be used in canned meat and fish dog foods at no more than 20 parts per million. If you are anti-sodium nitrite, there are canned and semi-moist products that don’t contain sodium nitrate available on the market.

No to added salt

Commercial dog food can contain too much salt. The AAFCO recommends adult dog foods only contain 0.08 percent sodium. If you have an elderly dog (over seven years old), or your dog has health issues like hypertension, heart, liver, or kidney illnesses, extra salt is a big no-no.

“Cellulose is the structural carbohydrate that provides strength and rigidity to trees, blades of grass, stalks of wheat, and bolls of cotton and is one of the most abundant biological polymers in the world,” according to PetfoodIndustry.com.

And it, or cellulose powder, is making an appearance in some dog food products. Although it’s a fiber, pure cellulose is not the same type of fiber found in fruits and vegetables.

“Powdered cellulose has a tremendous amount of insoluble fiber, and too much of it can interfere with your pet’s ability to digest and assimilate important nutrients like protein and minerals,” according to an article on Healthy Pets.

Cellulose adds bulk to dog food, but not necessarily nutrition.

Vegetable oil is usually made up of soy, sunflower, or corn oils, while tallow and lard are low in nutrition. Veggie oil is a triglyceride from a plant and it does provide omega-6 fatty acids. But because it’s all bucketed under “vegetable” you don’t really know what you’re getting, or the nutritional makeup of the vegetable oil listed in your dog food.

On the other hand, fish oil contains EPA and DHA, and omega-3s. Krill oil is a healthful option, and even coconut oil is becoming popular for dogs as a relief to dry skin (it can be ingested or applied topically). PetMD recommends coconut, krill, flaxseed, and fish oils for dogs, rather than vegetable oil.