Why does my puppy keep eating grass and dirt?

Why does my puppy keep eating grass and dirt?

Puppies eat and chew whatever they can get their mouths on. They’re not particularly discerning — or maybe they are, and that’s why they go for your expensive designer shoes instead of the dirty, old runners you wear while mowing the lawn.

Puppies explore the world with their mouths (and noses). That’s often why they’ll scoop up a clod of dirt, or a mouthful of leaves, or taste another dog’s poop. They’re learning about their environment and what’s in it.

Grass and dirt-eating aren’t that unusual. But it can go too far and cause health risks for your puppy.

Some dogs eat all kinds of things. This is due to a condition called pica, which causes a dog, or a puppy, to eat non-food items. A dog may fixate on a specific thing (socks, for example) or be happy to eat whatever is lying around: their bed, toys, containers, hair elastics, drywall, underwear, golf balls — you get the idea.

Pica is diagnosed because of the behavior the puppy or dog is demonstrating, and it isn’t always linked to an underlying medical condition. This can make it hard to treat. Causes can be anything from nutritional imbalances to hormonal imbalances, to stress and anxiety. A dog with pica might be struggling with boredom and eating to relieve it.

Some psychological reasons a dog may develop pica are:

Some medical reasons a dog may develop pica:

Pica, and even eating grass and dirt, can become a problem if your puppy eats something indigestible or large enough to cause an intestinal obstruction. A gastrointestinal obstruction has to be removed by a vet before it causes severe internal issues. Rocks and sticks found in grass or dirt can injure your puppy internally, or hurt its mouth and gums. Long blade grass is not really a risk unless it has been chemically treated, but if your puppy is eating clods of grass and dirt, there could be sticks and pebbles mixed into the roots.

Some serious side effects linked to unusual eating habits are vomiting, diarrhea (especially dangerous for small breed puppies because they are easily dehydrated), ulcers, choking, infection, tarry stools, and poisoning.

Dog owners with pica will need support from the vet to run tests for underlying medical conditions and to provide guidance on how else it may be treated.

Pica isn’t exactly the same as coprophagia, which specifically relates to dogs, especially puppies, with a habit of eating their own feces or the feces of other animals. This behavior can be learned from a mother dog or because a puppy enjoys the taste or texture of poop.

Coprophagia is the most common form of pica in dogs.

Why does my puppy love grass and dirt?

There are a lot of theories about why dogs like to eat grass so much: 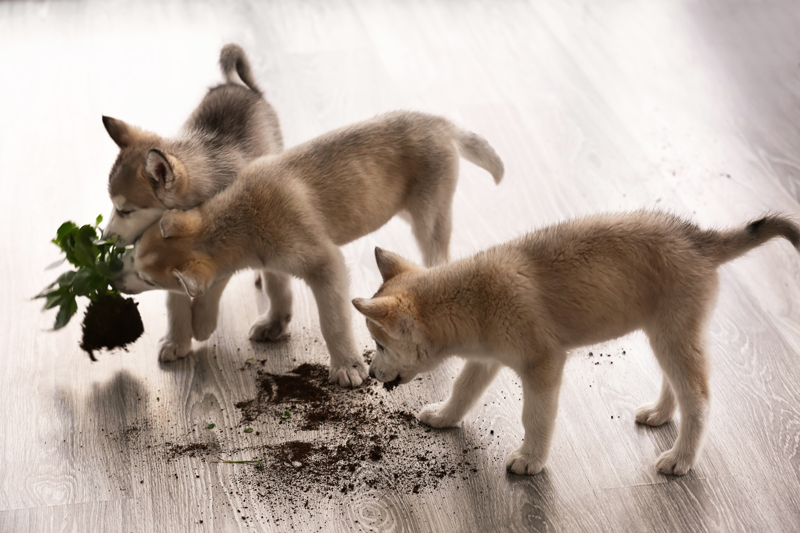 Overall, eating grass isn’t a serious concern unless it has been treated with pesticides or herbicides. Many dogs eat it and it’s considered a natural response.  It’s not true that every dog eating grass like a goat is trying to throw up. Only a quarter of dogs that eat grass actually vomit.

Dirt is often appealing because it comes with all sorts of buried goodies: urine from other dogs, insects, or manure. A little bit of munching won’t hurt as long as your puppy isn’t eating rocks (watch out for broken teeth!) or chewing on rocks. Rocks are a choking hazard, hard on teeth, and can cause serious bowel obstructions. The other major concern with dirt is parasites: all sorts of bacteria and viruses live in dirt.

Some dogs are looking for nutrients when they delve into dirt and grass and are acting instinctively for the missing elements of their diet.

Leaves can also prove alluring for puppies because they might contain traces of urine or feces from other dogs and animals. Leaves are also crunch come fall.

“Wild dogs have been observed eating grass and leaves in the wild, especially when they aren’t able to find regular sources of meat,” according to the American Kennel Club article Why Does My Dog Eat Leaves? “While plants are not as nutritionally dense as meat, wild dogs still use them to fill gaps in their diet.”

Your puppy may be doing the same!

What can I do to reduce the amount of grass and dirt my puppy is eating?

Add some dietary supplements: pro or prebiotics, Omega-3s, or extra vitamins and minerals. Always check with your vet or an animal nutritionist to determine dosage and to make sure a supplement is safe and healthy for your puppy.

Try a new puppy food. It could be that your pup’s system isn’t working well on its current diet. Trying something new is easy. There are so many options: dry, kibble, air-dried raw, dehydrated, semi-moist, canned, and raw. Maybe you haven’t found the right food yet.

Give your dog a food-dispensing toy or ball for it to play with. There are other types of puzzle games that you can use with your dog to engage their brain and bust up their boredom.

Play with your puppy more. Puppies sleep a lot, but they love to play, wrestle and goof around with their favorite humans. It helps tire them out and encourages them to come to you instead of eating something peculiar when they’re bored.

Exercise! Make sure your puppy is getting an age-appropriate amount of physical activity each day.

Distract your puppy with an extra special treat if it’s going for a pile of grass or dirt. Wave a bit of cooked turkey or a nibble of cheese in front of its nose to get your puppy moving in a different direction.

Teach your puppy how to leave it. There are many wonderful puppy training videos online that cover this particular topic. Once you’ve taught your puppy to “leave it!” you’ll more easily be able to keep it away from grass, dirt, and other undesirable items.

If grass and dirt-eating behavior become obsessive, consider working with a dog behaviorist.

We might say that dogs are Man’s Best Friend, but we all know that it goes far deeper than that.  Dogs are more than our friends – they are our companions, our confidants, and our family.  Together, we are able to share expert dog advice and expertise designed to help care for, protect, entertain, and honor our dogs and puppies to the best of our ability – and on behalf of everyone at Dogs N Pawz, we thank you for caring so much for your furry family member and being part of our journey.